When attending Bacon and Bourbon, one will most definitely find themselves at the Rare Bourbon Bar. A joyful delight for the seasoned bourbon lover or an overwhelming menu of confusion to the novice bourbon drinker. How were these bourbons selected? Where were they sourced? Does rare always mean good? Should I drink them neat or on the rocks? Let’s start at the beginning, shall we?

Becca and Denise, owners of GoCo Events, had a dream in 2013 of creating a new fundraiser event that broke away from the formal galas they had been producing for a decade. They wanted something fun, accessible, with high quality food and a casual atmosphere. The team’s brainstorming settled on the idea for Bacon and Bourbon and they were soon introduced to whiskey and bourbon connoisseur Kain Slowikowski. At that time Kain was GM and bartender at Boones on King Street. Boones was known for their collection of whiskeys and bourbons. Owner, Bucky Parks, had originally started a small collection when the bar opened.  Kain and Bucky had always had an interest and curiosity about spirits but really took a deep liking to bourbon.

"Becca and Denise are two of the most genuinely fun, creative and open minded people I have ever met. I feel those are important ingredients when putting together such a large festival that includes thousands of moving parts and ideas."

It turned out to be a great partnership for Becca and Denise. They wanted guests to come in feeling curious, not intimidated and Kain shared that same perspective. Along with providing knowledgeable and experienced bartenders to staff this bar, Kain helped design the rare bar layout and helped collect the inventory. The first year of Bacon and Bourbon hosted 52 bottles in the Rare Bourbon bar. That number has grown to over 140 bottles in 2020.

There are some key factors around the rare bourbon bar that the team abides by. First, no gouging. Take the price paid for each bottle and divide it by 25 pours. Yes – they do pay $1,500 to $2,500 for some of the hard-to-find bourbons. But there are plenty of great options for a $10 pour. Next, help guests feel comfortable asking questions and experimenting. Want water or ice in your tasting, no problem. Don’t like that one, let’s talk about it and lead you to a better option.

At the end of the day, Bacon and Bourbon was created to raise money for great causes in our community and allow folks to learn more about bourbon. (Southerners are already pretty schooled on bacon) So when you step up to the rare bourbon bar, take a deep breath and know you are with friends.

Who’s Serving it Up Behind the Rare Bourbon Bar?

Kain and Bucky’s partnership at Boone's Bar and their work with Bacon and Bourbon also led to the formation of a bourbon club called Mash Bros. in 2017. Mash Bros. is a club dedicated to furthering their knowledge in the history, makings, and complexities behind each whiskey and bourbon. This club now travels around the United States every year to hand-select the rare bourbons found at the Rare Bourbon Bar and serves them up with knowledge and enthusiasm.  Watch the clip below of a typical Mash Bros gathering.

Stay tuned for the next story about Russels Reserve Single Barrel Selection found at this years festival! 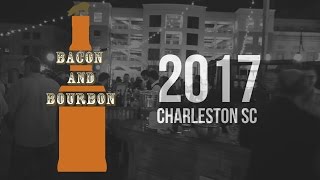 Where We Stand Magazine